Back during our days of living in our motorhome we were known to park for a night at a casino along our way. Most allow this, and if they did we felt like it was only fair that for the privilege we should at least go inside for a game or two.

But in all of our casino (and Walmart) camping travels, we never made it to one of Nevada’s most popular RV destinations, Laughlin.

Recently, in keeping with our New Year’s idea of exploring a little closer to home, we decided to rectify that oversight. But this time we didn’t stay in the parking lot, or even the RV Park across the street, we had a nice room indoors.

The first thing we noticed about Laughlin when driving in was the lush, green landscape along the big river that runs right smack dab through the middle of the Mojave Desert. It’s quite a sight to see the Colorado River, fresh from cutting through the Grand Canyon, create this oasis.

The town’s namesake, Don Laughlin, must have thought that too, when he first laid eyes on this spot while flying over back in 1964. He was looking for a new place to build a casino and felt this was nearly perfect.

When we arrived at the end result of his vision we learned all about his eccentric journey from Minnesota fur trapper to casino king with a city named after him. While still in high school, he bought a few slot machines and ran an only semi-legal gambling ring up in the land of 10,000 lakes.

His Minnesota cash cow was going so well that he dropped out and made his way to Las Vegas to open the 101 Club. It was after selling that enterprise a few years later that he set out in search of a new site to develop where California, Nevada and Arizona meet. 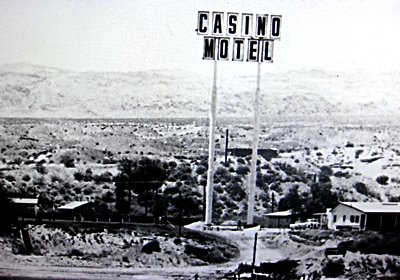 Laughlin picked this location not only for its natural beauty, but also its proximity to Route 66. With that in mind he bought a rundown little motel and christened it the Riverside Resort. Time proved his instincts to be right on.

He saw the potential in his incredibly humble beginning of two tables and a dozen slot machines, along with the eight tiny rooms.  Making his “resort” even smaller was the fact that only four of those rooms were available because he and his family were occupying the rest.

Over the following decades multiple renovations took place and steady growth led to the two towers with over fourteen hundred rooms that loom over the river today.

At some point the local Postal inspector decided the growing settlement needed a name and dubbed it Laughlin, after the founder. Before too long, other casinos began to sprout up so that now there is a mini Las Vegas style strip.

But unlike Vegas, it is not overly crowded and crazy. Plus, it has scenery to enjoy that isn’t man made neon, fountains, or landmark reproductions. We loved the ability to walk along a real river and see the mountains and stars.

When the sun came back up we made a bee-line back to this latest version of the Riverside Resort to check out Don Laughlin’s Classic Car Museum & Antique Car Sales.

The cars aren’t all his, they rotate the displays from private collections and consignment offers of some of the world’s most celebrated makes and models such as Corvettes, Mustangs, T-Birds, Cadillacs, Rolls-Royces, and Ferraris.

Many are outstanding examples of some of the earliest vehicles made, with Ford Model T’s especially featured, while most are from the heyday of classic American automobiles, with a healthy dose of muscle cars thrown in.

There are historic, along with notorious, limousines, cars, and motorcycles from Hollywood, and some incredibly well preserved antique workhorses like tow trucks and delivery vans from everyday life… and every single one is in pristine condition.

One last surprise awaited us near the cars. We found a couple display cases of antique slot machines tucked away in a corner.

Since they were secured behind glass, we couldn’t try slipping a nickel into any of these one armed bandits to see if the odds were any better than the electric monstrosities we had thrown away a few too many bucks in the night before.

Something to remember when staying in a casino parking lot for “free” in the RV.