We are so grateful to Go Western Newfoundland, Parks Canada and Newfoundland and Labrador Tourism for making this adventure possible. As always, all opinions are our own.

While our explorations may not require nearly the mettle of a bunch of bearded, red-headed, horned-helmet-wearing brutes setting out across The North Sea in an open boat; navigating a house on wheels over barren, weather beaten roads up to the very top of Newfoundland‘s Great Northern Peninsula did require a certain measure of moxie.

The wild ride left us arriving a little late at the landing site of those ancient intrepid Norse explorers, but ultimately that worked in our favor. The L’Anse aux Meadows National Historic Site was about to close, which virtually gave us the place all to ourselves.

But we had to hurry so as not to miss the costumed reenactors, so we gave the Visitor Center a quick run through, snapping away with our trusty camera for later perusal, and headed down to the reconstructed Viking Village.

We made it just in time to catch them before they called it a day. They showed us the highlights of the long house, where the band of Vikings lived, pointing out the kitchen, chieftain’s quarters, and sleeping area.

The entire building and contents have been painstakingly reproduced, using archeological sites in Iceland and Greenland as guides.

This ties into the belief that the sailors who landed here came from those islands.

According to the Norse Sagas, passed down from centuries ago, Eric The Red, and later his son Lief, told tales of lands to the west that they had discovered in their journeys, including one they called Vinland.

For years modern archaeologist speculated on the location of this fabled land, most hypothesized that the Vikings had been to Baffin Island and in northern Labrador, but believed those to be the other lands mentioned in the stories, Helluland and Markland.

Because of the name Vinland, they speculated that it must be somewhat to the south, where vines could grow. More recently some theorize that the “vin” in Vinland might be better translated as meadow or pasture.

When, in 1960, Norwegian explorer Helge Ingstad found the remains of a Norse settlement on the shore of Epaves Bay on the northern tip of Newfoundland, it fit the meadow theory precisely.

If this wasn’t Vinland, at least it proved that the Vikings had been to North America.

One of the keys to unlocking the mystery of the Vikings landing here some five hundred years before Columbus was the discovery of iron nails and buckles.

The native Eskimo people did not use iron at that time, so clearly someone else had been here. This was proved beyond a doubt when the remains of a forge and furnace used to smelt and work the iron were uncovered.

Our Viking guide demonstrated the technique, and showed us how the metal was extracted from the peat along the banks of the creeks. The iron content was obvious, the water runs a rusty red color.

Thanking our Norse guides so they could clock out for the day, we walked over to the unrestored foundations of several other buildings.

This was thought to be more of a supply and trading outpost than a permanent settlement, but remnants of

at least nine large dwellings and many other smaller ones have been found, proving the site was active for some time.

See all the exciting food (and drink) we found in Newfoundland!

But our time had run out, plus we were about as hungry as a Viking, so we stopped at the nearby The Norseman Restaurant.

However, we seriously doubt Lief and his crew ever ate anything remotely as nice as our dinner, and they certainly never had an iceberg vodka martini or beer.

Yes, up here they make vodka and beer out of melted icebergs.

Speaking of icebergs, as we left the Viking village we got our first ever real life look at an iceberg, in fact there were several of them floating around in Hay Cove.

We got a great view even though it was nearly bed time, good thing the summer sun stays up until all hours of the night this far north.

Click here to see us KAYAKING with whales and icebergs!

Our late night look at the bergs had us itching to get a closer encounter, so the next morning we hightailed it down to St. Anthony and jumped aboard a boat for a whale and iceberg tour.

Things seemed fine as we left the harbor, but before we got to where the whales were hanging out, the weather took a nasty turn.

Our three hour tour had us humming “If not for the courage of the fearless crew, The Minnow would be lost…” as we crammed into the wheelhouse of the tiny ship (that was being tossed) along with two dozen other passengers.

One humpback flipper was spotted for a fleeting moment, but photos were impossible in the driving rain.

The Skipper knew a lost cause when he saw one and set sail for the safer waters of a sheltered cove.

The storm relented just in time for us to go out on the deck and get right next to a floating chunk of polar ice.

Soaked and chilled, we felt a little like icebergs ourselves, but we were too thrilled to care.

Watch: We go hunting for icebergs – and like all good hunters – we eat our prey!

Click here to see us KAYAKING with whales and icebergs!

Back on shore, we stopped in to learn about Dr. Wilfred Grenfell at the Grenfell Interpretation Centre just up from the dock.

In 1892, Dr. Grenfell came from London to Labrador on a charity mission to help the fishermen. What he found was a woeful lack of medical services, not only for the fishermen, but also the native population.

He began to address the needs by traveling to remote areas to provide treatment, often making his house calls by dogsled.

Over the next forty-five years the good doctor raised funds and supervised construction of hospitals and clinics in both Newfoundland and Labrador, all the while continuing his hands-on care.

He chose St. Anthony as the site of his headquarters and built his main hospital, an orphanage, and also his home in the town.

This helped to make the fishing village into the hub of northern Newfoundland, meeting the medical needs of the entire region.

In fact the original hospital now stands in the shadow of a new state-of-the-art modern facility that serves as the culmination of doctor Grenfell’s vision.

With the skies clearing, we walked up the hill to The Grenfell House, which now serves as a museum.

The entire home was open to walk through, so we really got a feel for life in the early nineteen hundreds, as well as a look at many of the doctor’s instruments.

With so much more of Newfoundland left to see, the time had come to set back out onto that lonesome road known up here as The Viking Trail.

By the time we pulled into the Tuckamore Lodge in the tiny town of Main Brook the rain had made a return, but not enough to keep us from checking out the incredible surroundings.

The Tuckamore is tucked tightly between a picturesque pond off The Salmon River and an arm of Hare Bay in The North Atlantic. 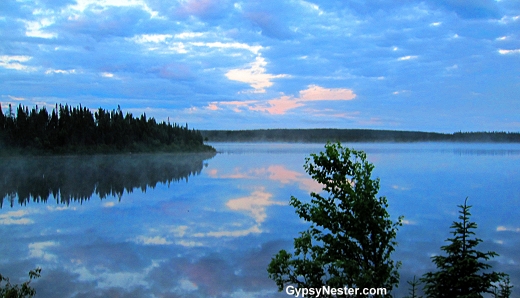 The innkeeper, Barb Genge, showed us around and then we joined several other guests in the main room.

As we got to know everyone we found that most were returning visitors, some have been coming up to the lodge for many years. It has become like a family summer home.

After a great meal and lots of conversation, we were ready to hit the hay. Strolling back to our room, a group just coming in waved and said that it was a good thing we were safely in and off the road because there were moose all over the highway.

Nice try, like we were going to fall for that old myth.

See all of our Newfoundland adventures!

We are so grateful to Go Western Newfoundland, Parks Canada and Newfoundland and Labrador Tourism for making this adventure possible. As always, all opinions are our own.

12 thoughts on “Icebergs and Vikings on the Great Northern Peninsula”