Huge thanks to Tourism and Events Queensland for providing this adventure! As always, all opinions are our own.

Quick, what’s the first thing that comes to mind about Australia?

Bet it involves animals, and likely some strange ones at that, right?

It was for us, so a trip to The Australia Zoo was an essential element in our tour of Queensland.

We had barely stepped past the gate when we encountered our first previously unknown creature, an echidna.

At first glance it appeared to be a porcupine, but once we saw that face, we knew that this was a hedgehog of a different color. These odd little anteaters, along with the platypus, are they only mammals left on earth that lay eggs.

We couldn’t see why, but they take their name from the half-woman/half-snake mother of monsters in Greek mythology.

There seems to be no resemblance to either a woman or a snake, and once the surprise wore off, the little guy was actually kind of cute. He even let us pat his thick, quill-like fur.

Maybe the mother of monsters tag would be better applied to some of the enormous crocodiles the Australia Zoo is famous for, because they are downright scary!

It was The Crocodile Hunter himself, Steve Irwin, that transformed the Beerwah Reptile and Fauna Park that his parents founded in1970 into the world-class attraction that it is today. The traditions, and his memory, are carried on by his widow, Terri Irwin. 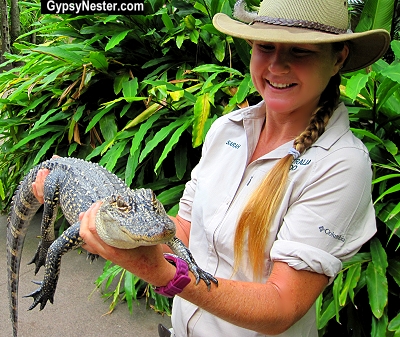 So crocs are the stars of the show, they even have their own coliseum, The Crocoseum, where five thousand spectators can watch in awe as these prehistoric predators demonstrate their speed and power.

And keep the zookeepers on their toes, one mustn’t let a two ton, twenty-foot mass of muscle and teeth get too close. “Crikey!”

But the zoo’s relationship with crocodiles goes way beyond entertaining the crowds.

They are also a part of International Crocodile Rescue, helping capture and relocate crocs that pose problems when they get too comfortable around civilization.

This is an effort that Irwin was instrumental in from an early age, and was celebrated on his television show, The Crocodile Hunter. The rescue unit also includes a rehabilitation facility for injured animals.

To calm down after the adrenaline charged croc show, we worked our way over to a more peaceful corner of the zoo where several of Australia’s indigenous species are kept.

First up, the koala, talk about peaceful; these little guys sleep about twenty hours a day. We were already familiar with koalas from our visit to the koala sanctuary in Brisbane, so we briefly said hello and continued on.

That brought us to a Cassowary, another animal we had never seen, or even heard of, before.

They are large, flightless birds, only slightly smaller than an ostrich or emu, that look like a small blue-headed dinosaur crossbred with a turkey.

They are also quite shy, so we were told that we were lucky to get as close as we did before they disappeared back into the forest.

Check out this weird guy in action in this ten second video!

Two more of Australia’s many marsupials were next on our list, wombats and the Tasmanian devil.

Like their more famous cousin the kangaroo, they both have pouches for their young, but wombats have a unique twist. Their pouches face downward — or backwards as the case may be — so that they don’t fill up with dirt when the wombats are digging their burrows.

The Tasmanian Devil and wombats are certainly not buddies. The devils are carnivorous, which is rare for marsupials, and will gladly attack and eat a wombat, or at the very least, steal his burrow.

As mean as they are, we did not witness one spin himself around faster and faster until he became a miniature tornado. Perhaps Bugs Bunny cartoons are not the best source of information about exotic wildlife in the far corners of the globe after all.

As strange and wonderful as all of these indigenous creatures were to our foreign eyes, like any good zoo, Australia Zoo features many non-native animals as well.

Several of these are featured in its African Safari exhibit.

We felt a bit like we were entering Jurassic Park as we passed through the giant stone gates and saw the rhinos, zebras, and giraffes roving across the recreation of the Serengeti.

A highlight of our day came when we got to feed the giraffes.

Standing up on a high platform, we held branches while the giraffes grabbed mouthfuls of leaves.

We had to hold on tight because these long-necked herbivores meant business when they got their teeth into a mouthful of foliage.

Even more surprising were their incredibly long, black tongues.

They seemed to come out of nowhere to lap up whatever food was available, especially carrots.

Don’t believe us about the tongues? Then watch these ten second videos!

On our way out of Africa we got to get as close as we’d ever been to a big cat, the world’s fastest land animal, a cheetah.

A keeper was taking her out for a stroll, and both seemed perfectly calm, at least as long as no zebras came into view.

So with our big cat curiosity piqued, we headed over to the Tiger Temple.

Built to resemble the Angkor Wat temple in Cambodia, it serves as home to Sumatran and Bengal tigers, but the main attraction on our visit were the two tiger cubs romping in the main enclosure.

The (not so) little guys were born at the zoo in August of 2013, a pretty huge event since there are less than five hundred Sumatran tigers left in the wild.

WATCH: See the tiger cubs and all the animals in action!

No trip to Australia, the zoo or otherwise, would be complete without holding court with some kangaroos, and Roo Heaven was the perfect place to do just that.

These guys seemed perfectly comfortable with a human presence in their habitat, so we shook hands and made our case for invading their space.

When the verdict came down, the jury of jumpers was just fine with us being there.

Helping Sick and Injured Wildlife Get Back Into the Wild

Our last stop of the day was a look into the most important work that is done at the Australia Zoo.

As part of the Irwin family’s longtime commitment to conservation, the Australia Zoo Wildlife Hospital was opened in 2004.

Dedicated to Steve’s mother Lyn Irwin, a pioneer in wildlife care and rehabilitation, the facility cares for several thousand animals every year.

A team of dedicated doctors and volunteers work tirelessly to heal the sick and injured, with the ultimate goal of returning them to the wild.

We toured the hospital with Michelle to get an up close look at the incredible care given to the wildlife.

WATCH: Get an inside tour of the hospital and they great work they do!

Koalas make up a big part of the patients, but almost any animal is welcomed and treated.

There are special units designed for reptiles and birds, and outdoor facilities, including a special area for turtles, to help acclimate the rehabilitated for their return to the wild.

During the process, the staff also performs valuable research into wildlife diseases and migration.

The project is funded through the Australia Zoo Wildlife Warriors.

It is a cause that we are happy to help support in our own small way, and we are glad to spread the word.

Seriously, how could we pass up helping these adorable little koalas?

Watch us feed crocs!
Bucket list check! We snorkeled the Great Barrier Reef!
Watch us skydive above beautiful Queensland – yikes!
Follow us into the Australian Hinterland
Go for the Gold Coast of Queensland
Let Us Introdoos-ya to Noosa and Spread a Little Sunshine Coast

Huge thanks to Tourism and Events Queensland for providing this adventure! As always, all opinions are our own.

Click here to see all of our adventures in Queensland!