Sometimes people say it is impossible to define, but we think this comes pretty close: The Fountain of Youth is in America’s oldest city.

Hmmm, on second thought, maybe that makes perfect sense, perhaps it is the secret to St. Augustine’s longevity.

Ponce de León roamed these parts way back in 1513 searching for the mythical spring of eternal vitality. We find it highly doubtful that he found it here, since he died eight years later at only forty-seven.

The fact that he wasn’t even said to have been looking for it at all – until years after his death – casts further doubt on the tall tale.

Neither of these facts stopped Luella Day McConnell from creating a tourist trap with a scientific sounding name, the Fountain of Youth Archaeological Park.

Luella, known as Diamond Lil, was famous for fabricating fictitious accounts, but the legend stuck and people have come to St. Augustine to drink from Lil’s fountain since 1904.

Surprisingly, reports of miraculous longevity seem to be in short supply. 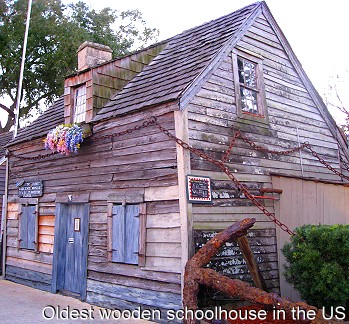 For the next couple hundred years – give or take – the settlement was under near constant attack from the British colonies to the north.

To protect themselves from this onslaught, the Spanish settlers built wooden forts -ten of them – before finally deciding to go bold and use several-feet-thick stones to build the impressive Castillo de San Marcos.

Ambling along the sea walls and then down in the moats, we got a feel for the oldest stone fortress in America.

On the seaward side, we came upon the most interesting of artifacts, a furnace where cannonballs were superheated till they glowed red hot.

These molten missiles were then fired at ships, setting them ablaze. Ingenious. No wonder the Brits could never take Florida by force.

A bargain was finally struck in 1763 with the Treaty of Paris, the British relinquished control of Havana in exchange for Florida. By then the Spanish must have figured they were never going to find the Fountain of Youth.

We weren’t naive enough to believe that some font of magic elixir was hiding around St. Augustine either, so we went in search of some other source of sustenance.

Just a stone’s throw from the fort we found Casa Maya, a wonderful little cafe that features fresh local and organic ingredients and, what’s this… Hibiscus Flower Sangria?

Ohhhhhh. Delicious and satisfying – perhaps we found the fabled fountain of invigoration after all.

Speaking of invigorating, a dash of Casa Maya’s delicious homemade habanero sauce on the Aztec Pork and Ranch Eggs with Mole sauce really put a spring in our step.

Both dishes were prepared to perfection, presented with panache, and priced properly. We were fired up – literally – and ready to take in the landmarks of St. Augustine’s Gilded Age.

Henry Flagler had a big idea. St. Augustine should be the new winter playground for the filthy rich, a “Winter Newport.”

Flagler certainly had the connections to pull this off. He was John D. Rockefeller’s partner in, and by most accounts (including Rockefeller’s) the brains behind, Standard Oil. So Flagler came down to Florida in the 1880s and started buying up everything in sight.

No other person had anywhere near the influence on making the state the tourist destination it is today as Henry Flagler. He was truly visionary in that manner.

His conquest began here in St. Augustine, with The Ponce de León Hotel and The Hotel Alcazar, that stand right across the street from each other in the center of town.

Neither serves as a hotel anymore, The Ponce de León is now Flagler College and The Hotel Alcazar is The Lightner Museum, but they can be viewed by the public. Seeing as how we are part of the public, we headed in, beginning with the good ol’ Ponce.

The Spanish Renaissance style of the former Ponce de León Hotel harkens back to the beginnings of St. Augustine and blends in beautifully with the semi-tropical surroundings.

An impressive structure both inside and out, the construction is entirely poured concrete – quite an experiment for those days – and, thanks to Flagler’s friend Thomas Edison (apparently this guy knew EVERYONE), one of the first buildings ever to be wired for electricity.

The interior has been restored from floor to ceiling, and we must say, the ceilings are works of art in their own right.

The Ponce de León Hotel made it through the depression, then served as a Coast Guard training center during World War II and ended up playing a role during the civil rights movement of the early sixties as the site of a student sit in when Dr. Martin Luther King came to town.

In 1968, the hotel had become the centerpiece of the newly-established Flagler College. We have to say, as college facilities go, it’s pretty amazing. The ornate ballroom now serves as a cafeteria and the old guest rooms as dorms. We spoke to one of the students about her housing and she gushed over how great her digs are.

Good to see she understood just how cool her rooming situation is – you never know with the young whippersnappers these days!

Wandering across the street and through the gardens of The Lightner Museum we entered the huge courtyard of what once was The Hotel Alcazar.

A truly a grand resort in its day, Captains of Industry could throw a bash in the three-story high ballroom or enjoy the spa, complete with a steam room, massage parlor, gymnasium, Turkish bath and the world’s largest indoor swimming pool.

Sadly the pool is no more, the space has been transformed into an exhibition area and a restaurant. But we did find the very spot where a turn of the century post card captured the record holding cement pond and snapped our own modern, less liquid version.

St. Augustine’s third hotel jewel from that era is the only one still operating as an inn. The Casa Monica Hotel was opened by Franklin W. Smith in 1888 to compete with Flagler’s twins next door.

Smith’s plan failed rather miserably and Casa Monica was bought and renamed The Cordova Hotel by Flagler the following year.

Smith had experimented with the construction when he built his home, the quirky Villa Zorayda, a few years earlier. Even with the grandiose hotels surrounding it, this was the first building we noticed when coming into town.

The eccentric mansion, based on the 12th-century Moorish Alhambra Palace in Granada, Spain, is impossible to miss. A sore thumb blends in quite nicely by comparison.

Flagler also employed Smith’s poured concrete style in several stunning churches that he built throughout the city, perhaps the most impressive being the Memorial Presbyterian Church.

With a dome inspired by St Mark’s Basilica in Venice, this church is so rockin’ that Flagler chose it as his final resting place.

As sensational as all of Flagler’s creations in St. Augustine are, he had even bigger fish to fry. To see his most opulent efforts we’d have to go further south, all the way to Palm Beach.

We know where we’ll be headed.

4 thoughts on “Getting Gilded in St. Augustine”