January is manatee mania month in Florida. There is no better time of year to see – and swim with (yes!) – these gentle giants in The Sunshine State. Floridians go all out to show off the endangered sea cows, including throwing a festival or two. Did someone say festival? No way we would miss that!

In winter the Florida subspecies of the West Indian Manatee (Trichechus manatus) can be found on both the Gulf and Atlantic sides of the state seeking warm waters. Since we had seen them on the Atlantic side a couple of years ago, and especially since we learned that it was the only place where we could actually get in the water and swim with manatees, we headed to the town of Crystal River on the Gulf Coast.

The area around Crystal River has about fifty mammoth fresh water springs that feed Kings Bay with perfect seventy-two-degree water year round. The manatees come to the springs to mate, feed, or just rest and get away from the colder seas. In fact, they like the water in the bay so much that they have been known to stay even through the summer.

We made an afternoon out of exploring our options as to which of the many “Swim With Manatees” boat tours to use by bicycling around the quaint little bay side village of Crystal River.

Along the way we spotted several sea cows feeding along the seawall in the bay. Let the mania begin.

After talking to a few of the tour operators, and reading up on the excursions while stopping off for a little waterfront refreshment, we were convinced that our ultimate meeting-the-manatees experience awaited us not in Crystal River, but ten miles south at Homosassa Springs.

So the next day we drove on down to board our boat ready to say howdy to some sea cows face-to-face.

Another of the massive springs common to the Florida Aquifer feeds the Homosassa River, and manatees are known to swim several miles up the stream to congregate near the source. We chose this tour because it is usually less crowded, the water is often clearer, and it had the added bonus of getting to see some monkeys.

Yup, monkeys, as in more fun than a barrel of. Just after leaving the dock our boat passed by the famous monkey island of The Homosassa Riverside Resort.

The five resident spider monkeys all gave us a good show, climbing trees and swinging from ropes while we cruised by. Our captain, Laura, explained how the little primates got there.

Dr. John Hamlet was convinced to move to Florida by the resort’s colorful owner G. A. “Furgy” Furgason. It seems the good doctor had been using monkeys to study the polio vaccine and Furgy, always the promoter, had the idea that they might make a good tourist attraction.

After dredging in the marina created a pile of rocks just offshore from his businesses, Furgy had his monkey island.

Another fifteen minutes or so up the river and we were wetsuited up and ready to go. But first the rules. Manatees are protected by several state and federal laws, so it is strictly forbidden to harass them in any way.

No chasing, poking, scaring, riding, or in any way going cowboy with the sea cows is allowed. It is not a roundup, pardner.

Captain Laura explained that it was best to try to stay still and let them come to you. And they did. A lot.

They are huge, adults often reach over one thousand pounds and babies nearly half that, and they swam right up to us. Several times we had no idea one was around until it was right next to us. They seemed to come out of nowhere.

Manatees are slow moving, very gentle, and actually seem to enjoy interacting with humans, so we mostly floated silently and let them move around us.

We even got to touch a couple of them, which is allowed as long as it is done softly and with an open hand. Their skin is a little bristly, with short, coarse hairs, and often covered with a layer of algae.

They nearly all have tell-tale parallel lines across their backs from boat’s propellers. In fact they have no natural predators, humans are really their only threat, mainly from impact with boats, but also loss of habitat and pollution.Sadly, as we had noticed in our land-based manatee viewings, almost every one of these congenial creatures bears scars from collisions with watercraft. 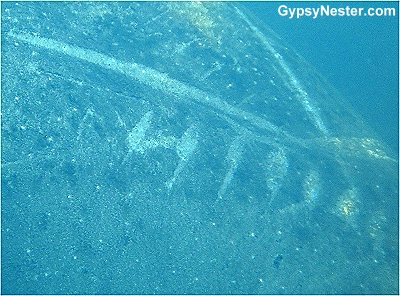 The good news is that a great deal of effort is being made to protect them and their numbers seem to have stabilized, with at least five thousand spending the past few winters in Florida.

One of the groups working to preserve the manatee population is Friends of Blue Springs State Park. For thirty years they have been raising funds and awareness with The Orange City / Blue Springs Manatee Festival.

Our timing was perfect, the festival was winding up the next day. So we drove across the peninsula to Orange City to get our fest on and see some more sea cows.

The in-town portion of the festival is a really fun fair, with food, music, booths and the like, but the main attraction was not manatees – it was dogs.

The Disc-Connected K-9 show wowed the crowd with the amazing frisbee catching antics of a group of well trained border collies. We even got to watch a world champion do his high flying disc catching thing.

But the festival really is all about raising money to help the community and the state park, so busses were provided to shuttle folks from town out to the park.

We climbed aboard our standing-room-only coach for the short ride while reading up on the park from a brochure.

Blue Spring is another first magnitude spring, pouring forth over one hundred million gallons of water a day, and like the springs around Crystal River, the water stays a constant seventy-two degrees year round.

So manatees love it, and many will swim miles up the St. Johns River to get to it.

Exiting the bus, we took a boardwalk path up to the source of the spring and got exceptional views of all sorts of wildlife along the way.

Turtles, alligators, and any number of birds and fish, but the stars of the show were being quite shy. The half dozen or so manatees we saw were all resting on the other side of the river from the path, so we didn’t get a very good view.

But that was fine with us, we really didn’t want to get greedy. We had already experienced about the best manatee encounter anyone could ever hope for.

Can’t get enough manatee action? Click here to see our sightings on Florida’s east coast! Be sure to watch our video on How to Spot a Manatee: