Sometimes it feels like we could belt out the classic old country tune I’ve Been Everywhere without too much exaggeration, but then we stumble upon an overlooked destination and remember that we are always looking for somewhere new. Kuala Lumpur is just such a place.

When the blip appeared on our radar we began to investigate, and boy did we like what we found, beginning with a climate that hardly varies no matter what the calendar says. Warm tropical days give way to temperate evenings year-round, perfect for exploring the many marvels of Malaysia’s capital and largest city.

Of course the first order of business is always getting there. For that there is no better way than best offers on AirAsia via Cleartrip. With hubs across the entire continent, they serve 25 countries including Malaysia, Thailand, China, Japan, Vietnam, India, and Indonesia while being named as the world’s best low cost airline for eight straight years. 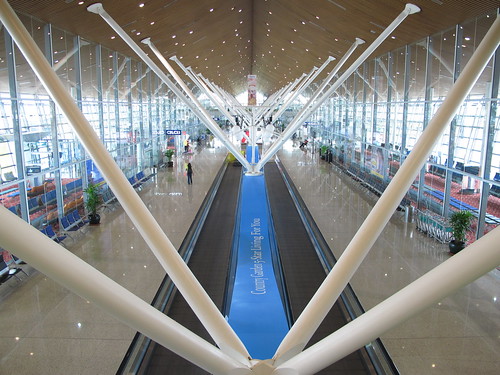 Even arriving in Kuala Lumpur, known as simply KL by locals, is a treat since the International Airport has been ranked as one of the world’s top airports. It also has two of our favorite things, free Wi-Fi and a train that runs directly into the heart of the city.

In town Merdaka Square is a great place to start, beginning with the impressive Kuala Lumpur Railway Station. This old depot is an extraordinary example of the Neo-Moorish architectural style that was prevalent in the late eighteen hundreds.

In addition to the station, Merdeka Square has several other fine examples of this blend of Eastern and Western architecture that combines British and North African designs, especially the Sultan Abdul Samad Building, Old City Hall and the Jamek Mosque.

But the plaza is best known as the place where the Malaysia flag was first raised. A black marble plaque marks the spot and now a flag flies from one of the tallest flag poles in the world, standing over three hundred feet high.

Not far from the square the Lake Gardens, officially Perdana Botanical Gardens, offer a relaxing respite from the city. This is also home to Tugu Negara, the National Monument dedicated to the soldiers who gave up their lives for their country. 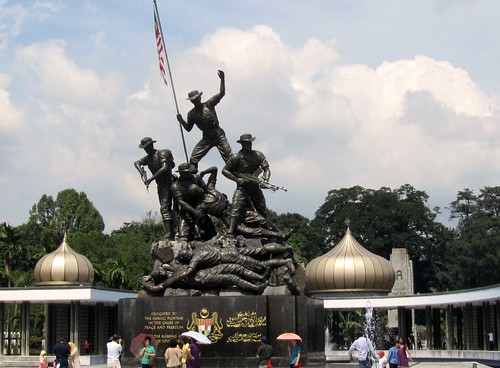 The massive bronze sculpture is the work of Felix de Weldon, who sculpted the Iwo Jima Memorial in Arlington, Virginia. The similarities are apparent, with both pieces featuring soldiers raising a flag.

Without a doubt the biggest thrill, and we are always seeking one, in Kuala Lumpur is the Golden Triangle. This is the place for some serious skyscraper scrutinizing, with the Petronas Twin Towers leading the pack. Until 2004 this was the tallest building in the world, and still holds forth in the top five. 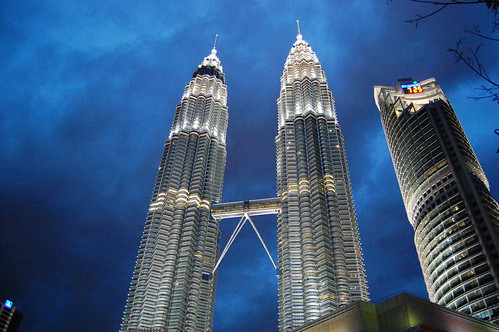 It is possible that the view from the nearby KL Tower is even better, since the tower is built on a hill. There is also a delightfully grandiose free film about the tower’s construction, simply irresistible for us in our never ending quest for the quirky. Top that off with a revolving restaurant and we have a can’t-miss mission.

Speaking of food, street side Mamak stalls are abundant throughout KL and the city is a great place for an introduction into Malaysian food because most people speak English and can explain exactly what is about to be chowed down.

Curry is hugely popular, including as a sauce alongside of the most common quick bite in Malaysia, roti canai. This cousin of the pancake is sometimes called flying bread because of the spinning and tossing (think pizzeria) involved in its creation. 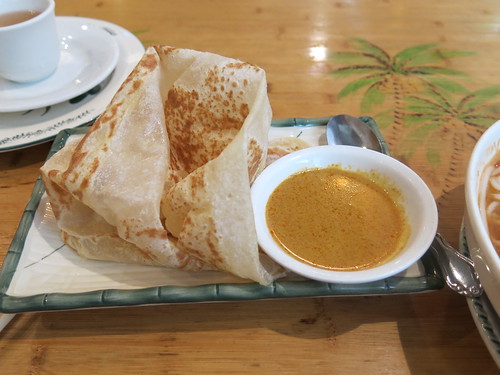 Wash it down with some teh Tarik, a frothy concoction of tea and hot milk, for the quintessential KL snack. The drink preparation can rival the dough throwing for showmanship, as the mixture is poured back and forth between two pots from ever expanding heights to give it a thick foamy head.

So now we realize that we have not been everywhere, certainly not until we take a trip to Kuala Lumpur.

4 thoughts on “Getting to Know Kuala Lumpur”