In our travels it is often a slice of unassuming, everyday life that delivers the unexpected, and satisfying, taste of a destination.

Staying inside the archaeological site at  Chichén-Itzá more than lived up to our expectations, but we had no idea the pièce de résistance awaited just outside the site’s boundaries.

At our lodging we were appropriately thrilled at the fact that relics were right outside our door, and our proximity to the remarkable pre-Columbian city meant that we could visit early in the morning and later in the afternoon, before and after the crowds.

The Pyramid at Chichen Izta

Still, after a day of ruins rambling we were thwarted in our usual desire to wander around and get a feel for local life, because once the park closes there is nothing around except a couple of hotels.

Luckily, the town of Pisté is only a few minutes away by taxi.

Since it serves as the gateway to Chichén-Itzá,  we expected the village to be dominated by hotels, restaurants, and tourist traps, but what we found was nearly the exact opposite.

Pisté seems nearly untouched by the swarms of activity and visitors at its nearby, ancient neighbor. We could hardly resist spending an evening enjoying some genuine Yucatán life. 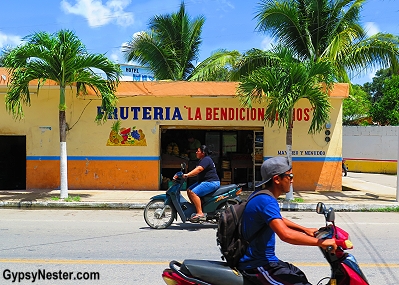 The town could be the least touristy of any place we have been in Mexico.

No doubt, some of this was due to the fact that we had come in the off season, but there was no hiding the fact that the town square is lined with little shops selling goods and services to the residents as opposed to the usual trinkets and such for the visitors.

We walked all the way around the plaza, checking out the church that, as nears as we could tell, doesn’t have a name.

It seems to be known as simply Iglesia Catolica, or Catholic Church, and like its name (or lack thereof) is a very modest little chapel in the style of the missions of the southwestern United States.

After our stroll we were ready to eat, and from what we could tell by far the most popular place to strap on the old feedbag was La Gran Chaya de Pisté.

The sign proudly proclaims Cocina 100% Yucateca, and they weren’t kidding, the food was most definitely one hundred percent authentic Yucatán.

Though the name means lime soup, this is good old chicken soup, but with a twist.

As with most dishes in the Yucatán the origin likely traces back to the Mayans however, the lime that gives it its name, and the chicken, were both introduced by the Spanish in the sixteenth century. The Maya people may have used wild turkey and local spices.

Another staple from the Mayan era made the base for our next dish, corn tortillas.

Strips of them were used like noodles in the soup, but they served as the entire delivery system for our second course, salbutes.

We would probably call them tostadas, but size and place of origin seem to make the distinction. Salbutes are small, with two or three served at a time, and are unique to the Yucatán.

If the tortillas are allowed to puff up while cooking, then stuffed with beans before topping with other goodies, they are known as Panuchos. For gringos like us they were hard to distinguish, so we ordered both for good measure.

In addition to the delicious authentic food, La Gran Chaya had another quality that made it perfect for whiling away a few hours, the location.

Sitting right across from the main square, on the busiest corner in town, made for some perfect people watching.

By far the bulk of the traffic was traveling on scooters and bicycles, and it seemed like every last one of them went through this intersection several times.

The motor bikes seem to be most popular, and regularly carried up to three passengers.

We never saw four riders, but would bet it has been done.

With some modifications, these usually two-wheeled vehicles have become the public transportation and delivery system for the town.

Many of the motorcycles have been transformed into taxis by adding a back wheel and an enclosed cab.

On some bicycles, an extra front wheel has been added to support a cargo area…

He really gave these puppies a workout on this trip. He wore them on the plane over, spoke in them at the TBEX convention, rambled the ruins in the heat of Chichén-Itzá, crammed them in his suitcase, rode in them on the bus to Valladolid, and STILL looks stylin’ – wrinkle free!

…or the extra space can be used for passengers.

Vendors have adopted this modification to become mobile shops, moving their wares to wherever the customers may be congregating.

After a few hours of observation, we felt satisfied that we had discovered the Pisté résistance of the center of the Yucatán.

See all of our adventures in Mexico!

YOUR TURN: Don’t you love those quiet travel days when soaking up local culture is a proirity? What do you think about the cycle action in Piste?

31 thoughts on “The Pisté Résistance: A Surprising Discovery in The Yucatán, Mexico”