In the center of the Sunshine State, we found an incredible variety of sun, fun, and excitement at almost every turn. Orlando sits right in the middle, so it served as a handy hub for our explorations of the amazing array of attractions within about an hour’s drive of the city. This meant that one of the many IHG hotels near downtown Orlando would be the perfect place to stay for a base camp.

Just northeast of Orlando, Daytona Beach has been known as the holy grail of auto racing for over 100 years. In fact, NASCAR began here in 1948. The cars used to race right on the beach, but these days, they run on the high-speed Daytona International Speedway, where every driver dreams of winning the big one, the Daytona 500.

That’s not the only time the track is rocking, though. There are numerous other races, along with tours of the speedway, throughout the year. We had a chance to ride on the track, climb atop the podium on Victory Lane, see the Daytona 500 winning car, and check out the Motorsports Hall of Fame.

A few miles south, high-speed history of another sort was made. This area is known as the Space Coast because the John F. Kennedy Space Center has been the site of every manned launch in the U.S.

For a real-life brush with outer space, the Kennedy Space Center offers several opportunities. It’s hard to beat seeing the Apollo 14 command module scorched from re-entry or the Shuttle Atlantis, which was the last manned shuttle to fly and retired here after 33 missions.

Wandering through the Rocket Garden, a dazzling display of historic rocketry featuring the Mercury, Gemini, and Apollo programs, was a bit like walking through the redwoods or skyscrapers in New York. By the end, our necks were aching from looking up so much. 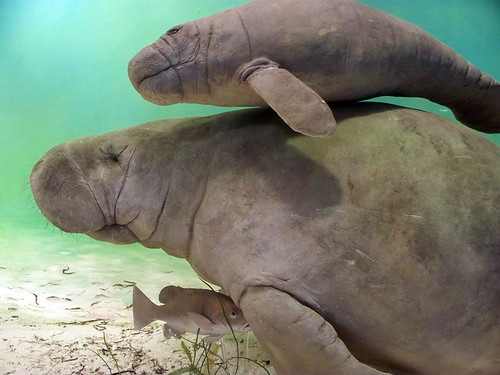 On Florida’s Gulf Coast, the Crystal River area has dozens of mammoth freshwater springs flowing year-round with the 72-degree water that manatees love. These sea cows come in from the colder ocean to rest, mate, and feed.

We were lucky to spot several of the gentle giants while walking and biking around the river, but the highlight had to be snorkeling with them. No, we didn’t just dive in. Manatees are carefully protected, so we signed up for one of the Swim With Manatees tours available in the region.

Speaking of manatees, some say they were the inspiration for the legend of mermaids. Our guess is that overly imaginative sailors had been at sea too long. While we can’t speak to the accuracy of that theory, we can say that mermaids are real.

Yup, we saw them with our own eyes at Weeki Wachee Springs State Park. While they may not be the mythical beings of lore, they are happy to perform underwater.

The show’s history dates back to 1946, when former U.S. Navy diver Newton Perry came up with the idea. By building a theater and developing a system of hoses for breathing while submerged, he created perhaps the country’s campiest roadside attraction. It grew to become one of America’s most popular tourist traps, but fell on hard times in the 1980s. Happily, the Florida Parks Department saved it and made it a unique state park that became an instant favorite of ours.

And so did this slice of Central Florida.

This article was created in collaboration with InterContinental Hotels Group.

3 thoughts on “Make Orlando Your Home Base for Florida Fun”