Kelly Ingram Park served as a staging ground for many of the demonstrations in Birmingham. Even though it was a bit chilly it felt good to do some walking outside, so we followed the park’s Freedom Walk which circles the four acre green space.

The Walk is lined with several statues, including four that we found had particular impact, by sculptor James Drake. Drake’s works put us right in the middle of the situations he depicts. None more so than Police and Dog Attack. The sculpture completely captures the ferociousness of three attack dogs lunging. It was a powerful statement, giving us the feel of what it must have been like to have the dogs turned loose back during the May 1963 demonstration.

Elsewhere along the path we encountered Firehosing of Dem-onstrators, depicting water cannons being turned on protesters, and Children’s March (“I ain’t afraid of your jail”), where we stopped to look through the steel bars of a jail cell window at two youngsters who represent the children that were arrested during the protests. 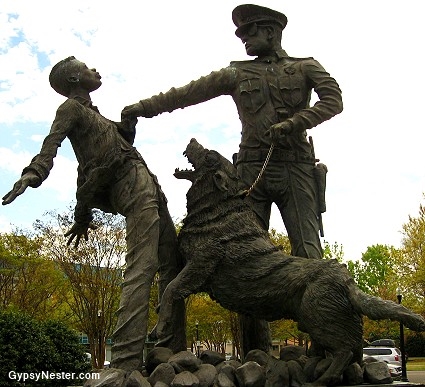 One of the most powerful works along The Freedom Walk also happens to be one that is not Drake’s, Foot Soldier Tribute is by Tuskegee University art professor Ronald McDowell. This serves as a memorial to all who struggled with “gallantry, courage and great bravery” in the civil rights movement. Mayor Richard Arrington Jr. dedicated the tribute with those words in 1995.

Birmingham was so violent during the civil rights era that it became known as Bombingham, but now the city seems to have come to terms with itself by commemorating its sordid history and celebrating the outcome.

“Peace Be Still” depicts Reverends N.H. Smith, John T. Porter and A.D. King in 1963. During a sympathy march they knelt to pray as the marchers were met by police dogs and billy clubs.

Read more about our trip through Birmingham, Montgomery and Selma with more photos and videos by visiting “Following the Freedom March in Alabama.”